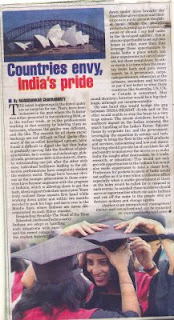 Indian students are being targeted right, left and center, at the down under.At a time when Indian students comprises the leading numbers in Australian, American and European universities,a shade behind the Chinese, the happenings are really deplorable to say the least. My personal experience while dwelling with such situations overseas have revealed that India in turn can model itself to be the global base for knowledge generation and dissemination only if the right moves are being made at the right time.Mr. Kapil Sibal is making the right noises, hopefully it would more than the usual lip services witnessed by Indians time and again

My small article, published in the leading English daily of the Central India, The Hitavada, dated 21st of July 09, which also happens to be my 413th publication throws light on this aspect as to how the Indian administrators and decision makers can leverage these unfortunate happenings to the country's advantage.