My 441st publication on the Master Blaster 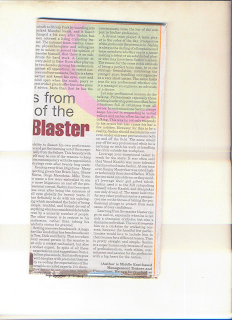 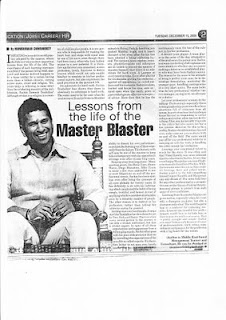 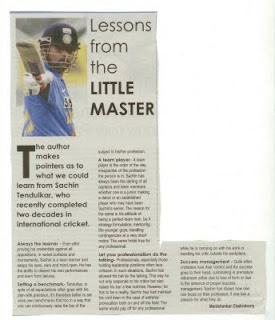 Some Quotes about Sachin Tendulkar-
A MUST READ FOR EVERY CRICKET FAN. JUST READ IT TILL THE END.

"Nothing bad can happen to us if we're on a plane in India with Sachin Tendulkar on it."
- Hashim Amla, the South African batsman, reassures himself as he boards a flight.

"Sometimes you get so engrossed in watching batsmen like Rahul Dravid and Sachin Tendulkar that you lose focus on your job."
- Yaseer Hameed in pakistani newspaper.

"To Sachin, the man we all want to be"
- Andrew Symonds wrote on an aussie t-shirt he autographed specially for Sachin.

“Beneath the helmet, under that unruly curly hair, inside the cranium, there is something we don't know, something beyond scientific measure. Something that allows him to soar, to roam a territory of sport that, forget us, even those who are gifted enough to play alongside him cannot even fathom. When he goes out to bat, people switch on their TV sets and switch off their lives."
- BBC on Sachin

"We did not lose to a team called India...we lost to a man called Sachin."
- Mark Taylor, during the test match in Chennai (1997)

"The more I see of him the more confused I'm getting to which is his best knock."
- M. L. Jaisimha

"The joy he brings to the millions of his countrymen, the grace with which he handles all the adulation and the expectations and his innate humility - all make for a one-in-a-billion individual,"
- Glen McGrath

"I can be hundred per cent sure that Sachin will not play for a minute longer when he is not enjoying himself. He is still so eager to go out there and play. He will play as long as he feels he can play,"
- Anjali Tendulkar

Question: Who do you think as most important celebrity ?
Shah Rukh Khan: There was a big party where stars from bollywood and cricket were invited. Suddenly, there was a big noise, all wanted to see approaching Amitabh Bachhan. Then Sachin entered the hall and Amitabh was leading the queue to get a grab of the GENIUS!!
- Shah Rukh Khan in an interview.

He can play that leg glance with a walking stick also.
- Waqar Younis

Sachin Tendulkar has often reminded me of a veteran army colonel who has many medals on his chest to show how he has conquered bowlers all over the world. I was bowling to Sachin and he hit me for two fours in a row. One from point and the other in between point and gully. That was the last two balls of the over and the over after that we (SA) took a wicket and during the group meeting i told Jonty (Rhodes) to be alert and i know a way to pin Sachin. And i delivered the first ball of my next over and it was a fuller length delevery outside offstump. And i shouted catch. To my astonishment the ball was hit to the cover boundary. Such was the brilliance of Sachin. His reflex time is the best i have ever seen. Its like 1/20th of a sec. To get his wicket better not prepare. Atleast u wont regret if he hits you for boundaries.
- Allan Donald

On a train from Shimla to Delhi, there was a halt in one of the stations. The train stopped by for few minutes as usual. Sachin was nearing century, batting on 98. The passengers, railway officials, everyone on the train waited for Sachin to complete the century. This Genius can stop time in India!!
- Peter Rebouck - Aussie journalist

"Sachin cannot cheat. He is to cricket what (Mahatma) Gandhiji was to politics. It's clear discrimination. "
- NKP Salve, former Union Minister when Sachin was accused of ball tempering

There are 2 kind of batsmen in the world. One Sachin Tendulkar. Two all the others.
- Andy Flower

"I have seen god, he bats at no.4 for India"
- Mathew Hayden

"Commit all your sins when Sachin is batting. They will go unnoticed coz even the GOD is watching"
- A hoarding in England

"Even my father's name is Sachin Tendulkar."
- Tendulkar's daughter, Sara, tells her class her father's name after the teacher informs them of a restaurant of the same name in Mumbai.


This is my 441st publication overall, carried out in The Indian Express, leading English Daily of western India, Pune, dated 23rd November 2009.The article dissects the learning one can derive from the life of the master blaster, SACHIN TENDULKAR.People from all professions and walks of life can very well derive important lessons from his on the field off the field activities and behaviour.
This same article with more details was again published in The Hitavada, dated 15th December 09, leading English Daily of Central India, looking into its significance to one and all. That happened to be the 445th publication for yours truly.
Read and Comment!
Posted by Unknown at 5:56 PM