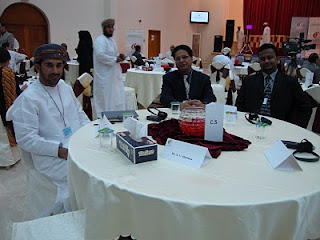 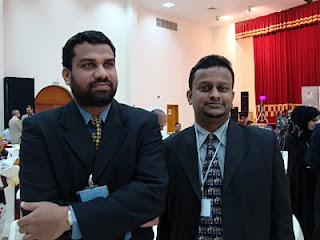 The international conference(Snaps in http://picasaweb.google.com/maniisonline/InternationalConferenceSCASSurSultanateOfOman#) on 21st and 22nd of February 2010,titled,Managing in the new world order:Strategies for sustainable business development,held in Sur College of Applied Sciences, Sur,Sultanate of Oman was an apt one considering the turmoil in the global economy.The welcome address by Dr. Hamad Bin Ali Al Alawi,Dean, Sur College of Applied Sciences rightly initiated the proceedings by throwing light on the diverse challenges the global economy was facing in light of the downturn being witnessed all around, with variable impact.The industries starting from services based ones to those in the manufacturing, and even the knowledge sectors are learning the lessons from the fast changes brought in the business cycle.Prof. Subash Chandra Sharma, Symposium Director was spot on while referring to the threats faced by the modern day economies and the comparable shift in the organizations functions and strategies globally in light of the burning issues like recession, climate change, novel expectations by the stakeholders and the like.These issues which were insignificant or even non-existent even a decade ago has come back to haunt organizations of all stature and sector, culminating in the revision of the approaches adopted towards various elements related to the success of an organization. Dr. Bruce Cronin,Head, Department of International Business, University of Greenwich Business School, London was focusing on the alterations brought in the strategies crafted by organizations during and after the slowdown/recession/meltdown,and the latent opportunities emanating from the emerging world and how this moment of crisis can be metamorphosed into an opportunity.There are economies globally which had a varying impact on their bottom-lines especially because the drivers in different economies were sometimes as different as chalk and cheese.That does not veer away the fact that in a connected world, where everything is accessible at the click of the mouse, it was imperative on the part of the decision makers to forecast and analyze the consequences of such incidents happening in a different part of the globe.The key note speaker,Prof. L.S. Rathore,former Vice Chancellor,Jodhpur University,India rightly pointed out how the solid fundamentals of the economy of the Sultanate and high domestic consumption driven economies in China and India have had a minimal impact on their economies, apart from being the rescuer-in-chief for the world economy at large.Prof. Rathore also emphasised on the visionary approach of His Majesty, Sultan Qaboos bin Said in ideating and implementing an alternate economic model as the non-renewable energy based model is fast eroding was commensurate with the expectations of the august audience comprising of academics, industry executives,research associates,academic administrators from different parts of the globe.It was therefore expected for the individual paper presenters to touch upon a wide array of topics in business and management which was soothing to the minds and ears especially when the world was groping in the dark pertaining to the handling of the after-effects of the recession, biggest since the great depression.The conference deliberations stimulated the closed group interactions amongst the visiting faculties and head of the department,head of the section,Business Studies Department of Ibra College of Technology. They tried to decipher and brainstorm the source and cause of the present recession,the future of the global economy in particular and Omani economy in general, the importance of the blending of concepts like Islamic banking with the shaken and disintegrated investment banking and financial management approaches,the shift from socialistic to capitalistic to a neo-capitalistic cum socialistic model of economy where resources would be shared equally amongst the haves and haves-nots,comparison of Dubai economy which is loosing its sheen globally vis-a-vis that of the careful, solid and futuristic approach adopted by economies like that of the Sultanate continued on and on so as to find remedies to the problems emanating globally, in light of the topsy-turvy global business environment.
The recent news published in The Times of India (http://timesofindia.indiatimes.com/world/china/Serious-resentment-brewing-among-Chinese-as-rich-become-richer-Survey/articleshow/5600007.cms)has now offered a new food for thought for the conference audience as it says all is not well even with the major guiding force during this hour of crisis-CHINA!
One should indeed compliment the Ministry of Higher Education, Sur College of Applied Sciences and sponsors OMIFCO, Qalhat LNG, Oman LNG and Al-Ghubrah Power & Desalination Company to plan and execute such a fantastic and timely symposium!!!
Read and Comment.
Posted by Unknown at 7:40 PM